We began the recording session with the sound of the toy piano. I knew the engineer would want to isolate this sound, but I was used to singing and playing the toy piano at the same time. Sometimes the voice leads the piano, and other times the piano leads the voice. So how can one separate these sounds without compromising the musical dialogue between them?

As I took the toy piano out of its’ case and began attaching the legs, I looked around the room. It was spacious and bright with lots of wood, so there was a warmth to the space. But when I sat on the little stool and began to play,  the room felt enormous and vaguely intimidating for my tiny sounds. Meanwhile the engineers were busy gathering large blocks of thick foam. They began to encase the toy piano leaving only the keyboard exposed for me to play. A veritable fort started forming around me – just like the ones we used to build out of cushions from the living room couch. It was perfect. The toy piano sound was isolated and so was its’ mic, while I could sing to my hearts content, in my little fort, cushioned and contained. 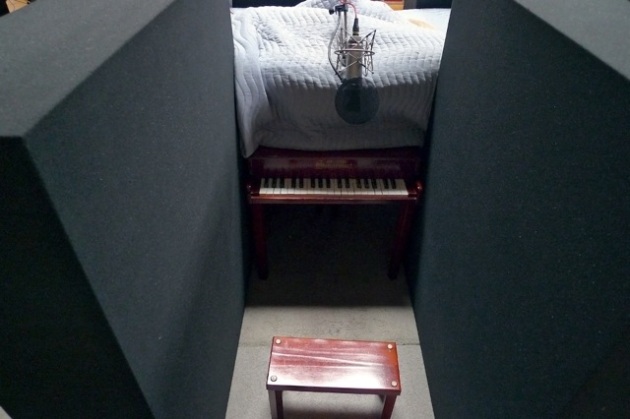